Cat Bolten has explored the relationships between people and the natural world since she was a child. Growing up in southern California, she sifted through the seashells embedded in mountains of dirt near her Pacific Palisades home, imagining she was finding evidence of the Chumash natives who once inhabited California’s central and southern coastal regions.

“My own exploration and an early fascination with nature documentaries peeled away the layer of the obvious and led me to ask deeper questions,” said Bolten, a core faculty member of the Kroc Institute for International Peace Studies, part of the Keough School of Global Affairs.

“If I don’t have the courage to stand up to an opponent and get up if I’m knocked down, how will I have what it takes to handle scholarly critique?”

These questions led Bolten to major in biology and anthropology as an undergraduate, study traditional medicine in Botswana and pursue graduate degrees in anthropology from Cambridge University and the University of Michigan.

It was while a graduate student at Cambridge that Bolten began thinking about Sierra Leone, where she has conducted research since 2003. Her closest friend in her master’s program, who had grown up in Sierra Leone, shared deep concerns with Bolten about the ravages of the devastating civil war the country endured from 1991 to 2002.

“She was desperate to help rebuild her country, and asked me if I would join her. I made a firm promise that I would do my research there,” Bolten said. “I told her I would contribute whatever knowledge I could by gathering data on the ground.” 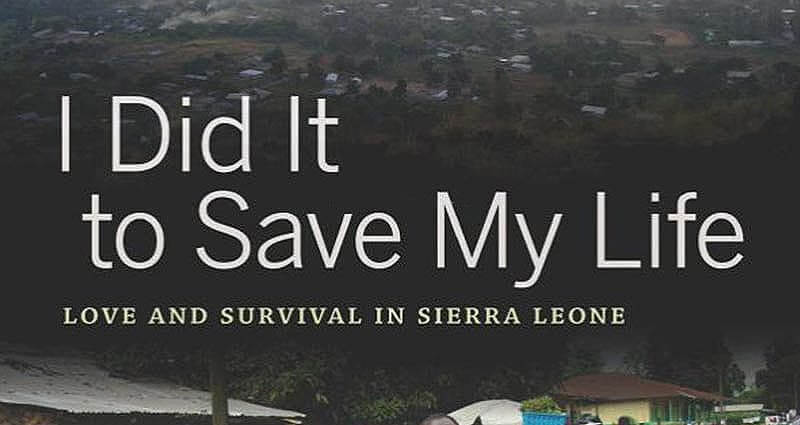 More on this book angle right

Nearly two decades later, Bolten has more than made good on her promise. Her first book, “I Did It to Save My Life: Love and Survival in Sierra Leone,” provides insights into how Sierra Leoneans survived the war, often making agonizing choices in order to make everyday life possible.

Bolten describes her forthcoming second book, “Serious Youth in Sierra Leone,” as a “theoretical intervention” into young people’s efforts to be taken “seriously” by older adults. Youth in Sierra Leone are viewed with suspicion and fear by their elders because most rebel combatants during the war were under the age of 25, Bolten said. In “Serious Youth,” she explores young people’s attempts to convince their elders that they are trustworthy and hardworking individuals. She argues that education and basic employment are not enough; that youth need acceptance and encouragement from their elders.

In recent years, Bolten’s research has expanded to include global health. During Sierra Leone’s 2014 Ebola epidemic, media outlets and academics alike sought her expertise. She was a member of the international Ebola Anthropology Emergency Task Force and she edited a special issue on Ebola for Anthropological Quarterly that has been widely cited.

While Bolten, a member of the Eck Institute for Global Health, began her work primarily in urban areas, one aspect of her current research identifies disease pathways and feedback loops between people and primates in the rural villages of Tonkolili district, where humans and chimpanzees live in close proximity. Sierra Leone has one of the highest populations of chimpanzees in western Africa, yet most live outside protected areas and rely on nearby crops for food.

“Because humans and animals utilize overlapping food resources — palm fruit, mango, pineapple — you may have one animal nibbling on something and a person eating that discarded fruit,” Bolten said. Working with a primatologist from the international nonprofit Save the Chimps, Bolten is documenting the ways viruses such as Ebola could potentially circulate between animals and humans.

“Effective global development, which includes global health, can’t take place without a consideration of the world in which humans are embedded,” she said. “I’m very wary of focusing on the human without examining that embedded world.”

Fueling Bolten’s work is a “profoundly pessimistic optimism,” as she describes it. “I wouldn’t do what I am doing unless I felt that we could stabilize life on a damaged planet, though I find the day-to-day news incredibly depressing. But still I feel that I need to do my part.”

The close relationships Bolten has developed with people in Sierra Leone provide sustenance for her work, she says. She recalls an especially moving moment when her next-door neighbors in the city of Makeni named their youngest daughter after her.

“She’s small Catherine, I’m big Catherine,” Bolten said. “I see her every year — she’s 11 now — and we have godmotherly chats about keeping up her grades and doing well in math.”

“Cultural anthropology is based on listening and a flexible, humble approach to research,” Bolten says. “You can’t be a control freak. Cultural anthropology is inductive and elicitive rather than deductive. The inherently inferior social position you must put yourself in to be successful is, unfortunately, a more obvious role for women to inhabit.”

Her field may require listening, but that doesn’t mean Bolten heeds every piece of advice. She traveled to Makeni for her first research project back in 2003 specifically because so many people in Freetown, Sierra Leone’s capital, warned her not to go there.

“I was told it was a dangerous place because, as the story went, it welcomed the rebels and was a place for rebel collaborators during the war,” Bolten said. “But once I got there I found that the rumors had all been untrue; it was simply a very poor town trying to get back on its feet.”

The fierceness Bolten brings to her work extends to other aspects of her life too. She was a competitive kickboxer; she has cornered for six Bengal Bouts champions; and she spent eight years on the coaching staff for the Notre Dame men’s and women’s rugby teams.

“Sports have always been vital to keeping me motivated and grounded,” Bolten said. “If I don’t have the courage to stand up to an opponent and get up if I’m knocked down, how will I have what it takes to handle scholarly critique? Sports and academia require equal parts ferocity and humility.”

In a multiplicity of ways, Catherine Bolten is a force for good. Notre Dame should be grateful to have her in its corner.