The common thread that runs through these areas of the law is that each one is central to the everyday lives of everyday people — which is what inspired Garnett to focus on them.

“Most of my research has been motivated by how the law can help disadvantaged communities and disadvantaged people thrive,” said Garnett, a John P. Murphy Foundation Professor of Law at Notre Dame Law School.

“One of the things I think we do really well here at Notre Dame is mentor our students, I think that’s an area where the Catholic mission makes a big difference.”

“A lot of my work focuses on policy innovation,” she said. “I’m concerned that sometimes the policies that are defaults and may have been around for a long time aren’t serving the common good as well as they could be. I’ve thought a lot about tweaking those policies to make communities thrive more.”

Innovation in education has long been one of Garnett’s interests.

Early in her career, she spent two years as a staff attorney at the Institute for Justice, a nonprofit public-interest law firm in Washington, D.C. In that role, she participated in the legal defense of some of the first programs designed to give parents more choices in where they can send their children for school. Her work included litigation that led to Zelman v. Simmons-Harris — a landmark case in which the U.S. Supreme Court decided an Ohio program that used school vouchers did not violate the Establishment Clause of the First Amendment.

As a legal scholar, Garnett continues to think about how education policies — including parental choice policies — can work better. Increasing access to schooling options is one goal, she said, but policymakers should also consider ways to hold schools accountable for performance and provide parents with the information they need to understand their options.

She added that these questions are particularly important for women.

“The deciders are often moms — busy women with multiple kids, and sometimes more than one job,” she said. “Writing a policy that enables parents to make an informed decision really does matter. It’s making it work for the people it’s intended to serve.”

Garnett examined these issues in a recent article, “Post-Accountability Accountability,” in the University of Michigan Journal of Law Reform.

“I talk a lot about how there’s this tension in education policy between wanting to regulate for quality to ensure that all the options are good ones and also making sure we maximize good options,” she said. “We don’t want so much regulation that some schools don’t enter markets or become afraid to participate. On the other hand, we don’t want schools that aren’t doing their jobs of transforming young lives.”

She combined her interests in urban development and education policy five years ago in her book “Lost Classroom, Lost Community: Catholic Schools’ Importance in Urban America,” which she co-authored with Margaret F. Brinig, the Fritz Duda Family Chair in Law at Notre Dame Law School. 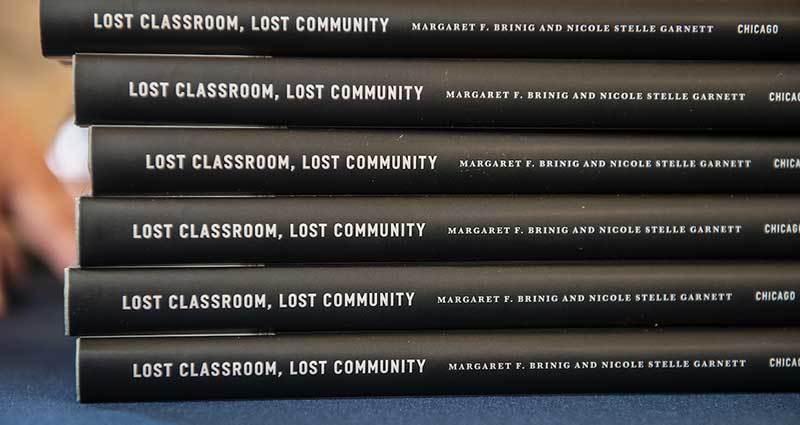 More on this book angle right

For the book, published in 2014 by University of Chicago Press, Garnett and Brinig looked at how neighborhoods are affected when a Catholic school closes. They analyzed crime data and indicators of social capital — including statistics related to social cohesion, trust and disorder — to measure the impact of Catholic school closures in Chicago and Philadelphia.

In addition to teaching and research, Garnett contributes her legal expertise to two of Notre Dame’s efforts to improve K-12 education opportunities. She serves as senior policy adviser for the Alliance for Catholic Education and is a fellow of the Institute for Educational Initiatives.

As a woman in the legal field, Garnett said she has been fortunate.

“I think the practice of law is generally hard for women, particularly women with children,” she said.

“But I’ve been lucky,” she added. “As a young attorney, I had amazing mentors. I came to Notre Dame in 1999, and I’ve had women bosses who have always been encouraging of my scholarship and teaching, good to me when I took maternity leaves and been supportive of in raising kids. And I’ve had great female colleagues. I came in with people who were around my age. It was great to have a cohort of women who were supportive of one another.

“I don’t tell my students necessarily that that’s going to be their experience in all areas of legal practice,” she said, “but I do tell my students they should find supportive places to be.”

And, while Garnett loves teaching and research, she said the best part of her job is mentoring students.

“One of the things I think we do really well here at Notre Dame is mentor our students,” she said. “I think that’s an area where the Catholic mission makes a big difference, because we’re not just here to teach or write or do research. We’re here to form people as lawyers and in the vocation of the law.

“When a student comes to me and they really are hurting or struggling, it’s nice to be able to say I care about you, I’m praying for you, you can always come to me,” she said. “Obviously, teaching is very important, but it’s an important way to teach — to support our students so they can thrive here.”